A week ago I was contacted by Lydia of WOMWorld.com/nokia who asked me if I would be interested in receiving an indestructible box. I was told that she found me via my twitter profile and felt it would appeal to my passions. After confirming the email was not spam I replied, intrigued, “yes please” and sent her my address. 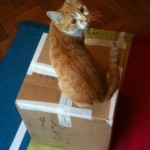 Yesterday it arrived. I opened the door to a delivery man who offered me a large cardboard box. Jof had suggested to me that it would likely be an N900 (which I had heard a little about but had not had time to look into) so I was expecting a small package. Surprised I was when the box the man handed me was so large and heavy - 35x35x35cm and 7.5kg! 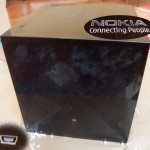 I took it indoors and opened it, to find a large package, cold to the touch, wrapped up in brown parcel paper and surrounded by polystyrene balls. Unwrapping this (and making a hell of a mess with the styrofoam balls which attempted to mirror the snow outside onto my living room floor) unveiled a 25x25x25cm black shiny box with a Nokia logo on top, a hinge and a small USB mini-B socket barely visible on one side. It was obvious that the top would open… but how? I wanted to attempt to hack it right away, but two things stopped me: firstly, I should be working; and secondly the box was wet with condensation from the sudden contrast with the cold outside. I went back to work. A hour and a half later I got temporarily stumped with a programming problem and decided to attempt to hack the box. My first step was to see what happened when I plugged it in to the USB. I booted into Ubuntu 9.10, ran dmesg -c to clear all the kernel messages, plugged it in, waited a few seconds, and ran dmesg again to see just the new logs:

I spotted the /dev/ttyUSB0 and instantly thought “minicom.” It took me a while to refamiliarise myself with the program and get it to connect, but soon I had fiddled with the speed settings (reduced it to just 9600baud from 115200) and was greeted the following output on my screen:

Unfortunately I could not type into minicom. I experimented with the speed and parity settings some more (as they had helped before) but no use. Finally I disabled hardware flow control and voilà I could type. Then it was simply a case of typing “?” to find out what commands were available:

And guessing what the argument to the nokia connecting command was… 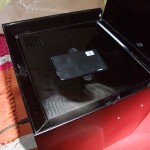 Hardly a challenge! A nice clichéd progress bar appeared for a few seconds and then *click* the lid popped open a little. I opened it fully and was pleased to see that they had even included dry ice to maximise theatrics, with the N900 packed safely waiting to be admired.

They really put a lot of thought into this! I delved deeper and here are all of my winnings: That’s: an N900 with accessories plus a butane soldering iron, sports band, cake, and a little fox figurine. The box itself was powered by a Roboduino Nano (which I intend to repurpose later… not sure what as yet) hooked up to a solenoid: 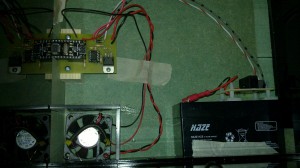 UPDATE: Techcrunch have a video of the opening - check it out!