First of all a note to say, I am sorry I took so long to publish this - have been very busy. Wrote it a couple of weeks ago and then forgot about it - and putting all the image thumbnails in takes a while, even if you can script it through image magic…

The last summer camp I went on was 2 years ago as last year I was too busy with Brain Bakery to allow myself time off to go camping. I learned from last summer that that was a foolish decision and that because I work so hard I need a fair amount of time off to recover – my brain was absolutely mush by September last year!

Since my last summer camp, 3rd^ Ringwood Scout Troop has acquired a new Scout Leader (SL), Mike, who includes amateur radio, whittling and knotting amongst the interests and skills he brings to the Troop. The previous leader, my Dad, Dave (Skip) now holds the position of Group Scout Leader (GSL). Inevitably, with a change of leadership often comes a change in programme content, and sure enough the camp’s focus leaned more towards visiting local attractions than previous camps had (and thus spent less time on-site). This is not really a bad thing – the Scouts seemed to really enjoy their time off-site, but personally I regret that the Scouts missed the opportunity to cook on open fires at least once – they either cooked on gas or had their dinner made for them most of the time.

This difference in focus is probably partly a result of the change in age ranges that the Scout movement implemented a few years ago – something that I do not agree with as it means that just when the Scouts start showing some real leadership skills, and start to use the knowledge that they have spent the last few years acquiring, they have to move on to the next age section (Explorers). Scouting used to work quite well with 15 year old patrol leaders as the rest of the patrol respected them, and they knew quite a bit of what they were doing. Unfortunately with 13 year olds they do not have that implicit respect, nor the knowledge required, so are unable to properly lead their patrols. I think it is probably for these reasons (and those of time) that Mike decided that cooking on open fires could not be accommodated on this camp.

We did, however, still spend a fair bit of time on-site and did inspections most days, trying to teach the children (“young adults”) how they should set out their site, how to look after their cooking utensils and equipment, and how to stay safe and warm. Unfortunately we cannot make them do things so a lot of the advice went unheeded due to laziness and lethargy – but I hope that next summer they will remember (or be reminded) and will set their sites up correctly from the very start. It only takes a few more minutes work at the beginning of the camp to increase the comfort and safety of their site considerably.

We spent the whole day travelling and setting up camp. 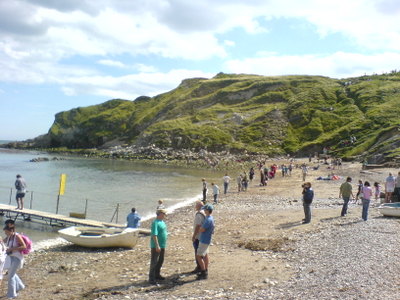 [Pic:1560, Lulworth Cove] On the second day of camp, once we had completed a full kit inspection (which took almost 3 hours due to the Scout’s laziness!), we headed down to Lulworth Cove for a bit of time on the “beach” and some ice creams. It is a beautiful area with some amazing natural features, such arches and blowholes. 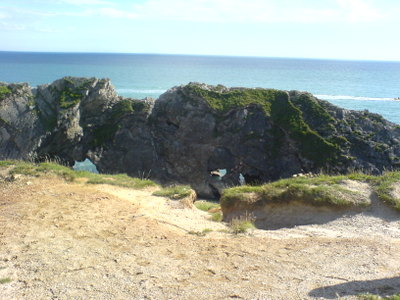 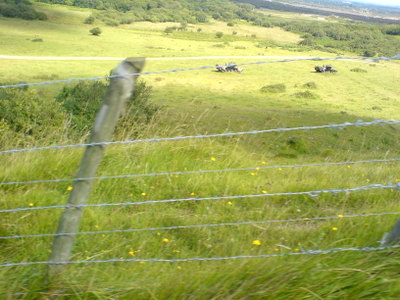 [1566, tanks on route] The next day we went for a walk out over the Lulworth Range Walks – this is in the midst of MOD land where they frequently practice with tanks to train the troops. They open the area to the public for a couple of weeks each summer – but warn us to stick to paths as there may be unexploded shells off of them.

This is the view from the carpark at the top of the hill. 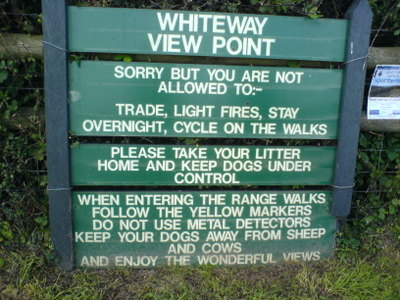 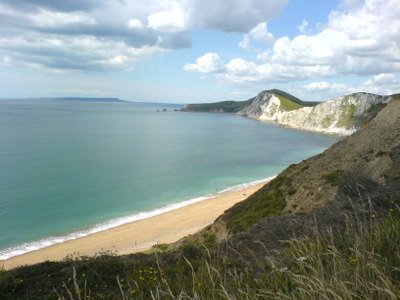 [1589, view of white cliffs and beach during descent] We walked down an extremely steep hill (there was small foot sized steps cut into the hill to aid descent) down to a beach that is normally inaccessible to the public. The descent was so steep that us leaders’ knees were shaking badly by the time we got to the bottom! Good job there was a beach for us to relax on, and have our lunch.

[Pic:1592, panorama of beach on which we had lunch] We then walked around an old deserted village which Jem and my Dad found very interesting. I don’t remember being more bored… I am more of a “new” person than an “old” - I like to look to the future rather than the past. I enjoy new technologies, old ones hold little interest to me (unless they are radically different, in which case I can get quite intrigued). Anyway enough about me… 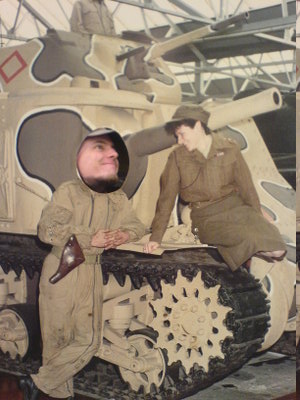 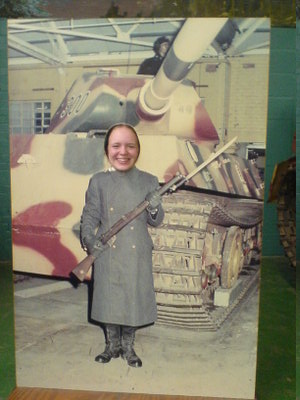 [1603, Jem with a gun] On Tuesday we went to the tank museum – not really my cup of tea, but almost everyone else enjoyed it (man, I am such a misery-guys…) It was on this day that I was ripped off massively by an ice cream van who did not display the prices of the ice creams – they just told you once you had placed your order. I was charged £2 for a broken, tiny, imported. cheap, poorly manufactured strawberry split. Still it did serve to cool me down. Grrr.

This was a very important day for Scouting – it was the 100th^ anniversary of that first ever Scout camp, held by Lord Baden-Powell on Brownsea Island in 1907. I am very proud to be a member of an organisation which now spans over 160 countries, many religions, and brings us all together as a family. It really is quite amazing. 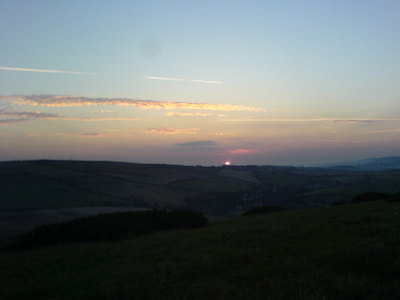 [Pic:1643, the sun finally rises!] To celebrate this anniversary, we decided to take part in the “Sunrise Ceremony” (something that did not officially happen until 8am, but we decided to get the Scouts up at 3:30 and walk them up a hill for the actual sunrise at around 5:34am…) where Scouts across the world would renew their promise. Worldwide Scouting has a common theme - “One world, one promise” - something Jem and I would be reminded of many times whilst on the Jamboree a week later. 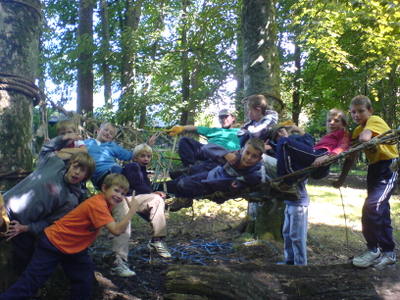 [1681 – the cubs and me (green t-shirt, yellow gloves) on “the web”] Many people joked that I would not be able to survive for a whole week without the internet. As it was, I barely missed it (only a few times when I was phoned up about possible problems with Blog Friends – I had no way of checking the servers myself without the internet). Well, I decided to make a “web” of my own – it was hardly world wide – it could only have a few users at a time (number dependent on weight of individuals!) You can see the fruits of our labour in the picture to the side. I told the cubs “only 3 on it at a time” - there was 12 on it at one time after that… totally ignored me. By the time they got off it almost touched the floor! We had to completely re-rope it.

The act of making things from ropes and poles is called pioneering in Scouting, and I really enjoy it. We also made a swing (our first project) and a “monkey bridge” between a few trees. Normally I use a lot of poles in my pioneering, but there were so many trees available that it was not necessary this time… almost a shame as we had brought more poles with us than usual. I just used an A-frame to tighten the monkey bridge at one end. I also used a couple of windlasses to tighten the hand rails. 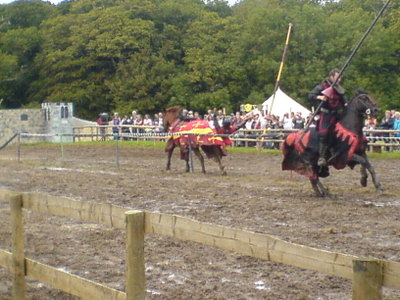 [1718, the red knight losing a lance to the evil black knight from the depths of hell, Lord Odeous…] We went round the corner to Lulworth Castle where we watched the jousting (by “Horses Impossible”) - it was really amazing to watch, though the rain during the first half was a real pain… We were all soaked through, but it was well worth it. 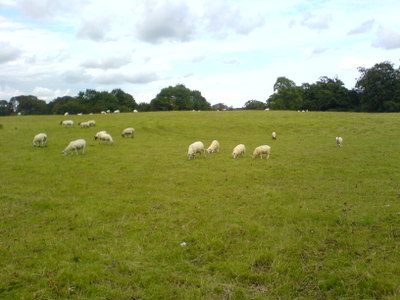 [1733, Picture of sheepies, for Jem] Just outside the castle were fields of sheep. The sheep were so noisy at times that we could hear them from our camp site!

We packed up camp, and set up bivouacs (that is sort of tents made from natural materials found nearby (such as ground sheets…)). Jem and me opted to use our web to sleep on… it would have been great had we not have slipped down to the bottom (it was sloped) where the ropes were less dense – we ended up half hanging through the web! Still, it wasn’t too bad… better than sleeping amongst the ants and woodlice…

We took down the remaining pioneering and all the bivouacs and returned back to Ringwood, where we unloaded everything into the stores and then went home.

All in all good camp, enjoyed by all who completed it.

By the way, I have left in my captions and image numbers so that members of the group can request larger copies of the photos from me. Email me on benjie at jemjie dot com.